“Nature vs. nurture, genes vs. environment—what is more important? My group is interested in understanding the roles of genetic and ‘epigenetic’ processes in cell growth and development. By understanding how the genome and epigenome talk to one another, we hope to be able to untangle the complexity of gene regulatory processes that underlie development and disease in plants and humans.” 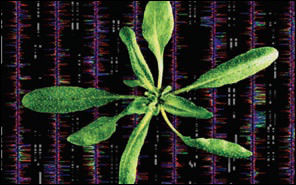 Our view of heredity has largely been written in the language of DNA, but recent discoveries in a field known as epigenetics—the study of heritable changes in gene function that occur without changing the letters of the DNA alphabet—show that how a cell “reads” those letters is critical. Adding molecules such as methyl groups to the backbone of DNA can change how genes interact with the cell’s transcribing machinery and hand cells an additional tool to fine-tune gene expression. The genomes of higher eukaryotes are peppered with modifications, but until scientists were able to take a detailed look at the whole genome, there was no way of knowing whether a particular chemical tag was critical or not.

Ecker and his team pioneered new technologies that allowed them to capture the genomewide DNA methylation pattern of the plant Arabidopsis thaliana and chart its effect on the activity of any of Arabidopsis’s roughly 30,000 genes. Cells employ a whole army of enzymes that add methyl groups at specific sites, maintain established patterns, or remove undesirable methyl groups. When Ecker and his colleagues compared normal cells with cells lacking different combinations of these enzymes, they discovered that cells put a lot of effort into keeping certain areas of the genome methylation-free. On the flipside, they found that when they inactivated a whole class of methylases, a different type of methylase would step into the breach for the missing ones. This finding is relevant for a new class of cancer drugs that work by changing the methylation pattern in tumor cells.

Being able to study the epigenome in great detail and in its entirety will provide researchers with a better understanding of plant productivity and stress resistance, the dynamics of the human genome, stem cells’ capacity to self-renew, and how epigenetic factors contribute to the development of tumors and disease. Ecker and his team are already looking into how methylation affects the development of human stem cells as they differentiate into other types of cells.