“Our lab is interested in identifying the mechanisms that plants use to respond to changes in their environment, particularly light. Our hope is that by discovering the molecular triggers that determine whether a plant matures into a spindly or robust specimen, we can contribute to efforts to increase crop yield and alleviate hunger.” 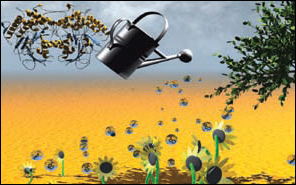 Plants by nature may be rooted to one spot, but they are remarkably adept at making the most of their digs. Activating a complex series of molecular switches that regulate their growth patterns, they literally seek their place in the sun by reacting to changes in their surroundings in ways that maximize their chances for survival.

Chory and her team have recently identified two pathways that govern different aspects of plant growth. For light-loving plants, competing with larger flora for a share of the sun can lead to so-called shade avoidance syndrome—a set of responses in which they expend their growth resources toward stem elongation rather than bulking up harvestable portions such as leaves and seeds. Using the reference plant Arabidopsis thaliana, Chory’s group identified a series of genes that plays roles in the shade response and identified one that encoded a new enzyme. She and her colleagues determined that the enzyme uses the amino acid tryptophan to synthesize auxin, a hormone that regulates plant growth. This pathway is rapidly deployed to synthesize auxin at the high levels required to initiate the multiple changes in body plan associated with shade avoidance. Despite auxin’s importance for plant growth and development, the details of how it is synthesized have puzzled plant biologists. Multiple biochemical pathways for the production of auxin have been proposed, but the specific function of each pathway and how they all intersect is not known. Now the role of at least one pathway has become clearer.

Starlight, not daylight, lies at the heart of another recent discovery by Chory and her colleagues. At least since Charles Darwin, scientists have known that many plants grow in regular nightly spurts, with plant stems elongating fastest in the hours just before dawn. Chory’s lab has identified the genes controlling those bursts of rhythmic growth. They found that expression of a large number of genes scattered around the Arabidopsis genome dealing with hormone biosynthesis, hormone signaling, and hormone metabolism are all tightly correlated with rhythmic plant growth.

These discoveries could eventually allow scientists to design crops that can grow substantially faster and produce more food than the most productive varieties today.